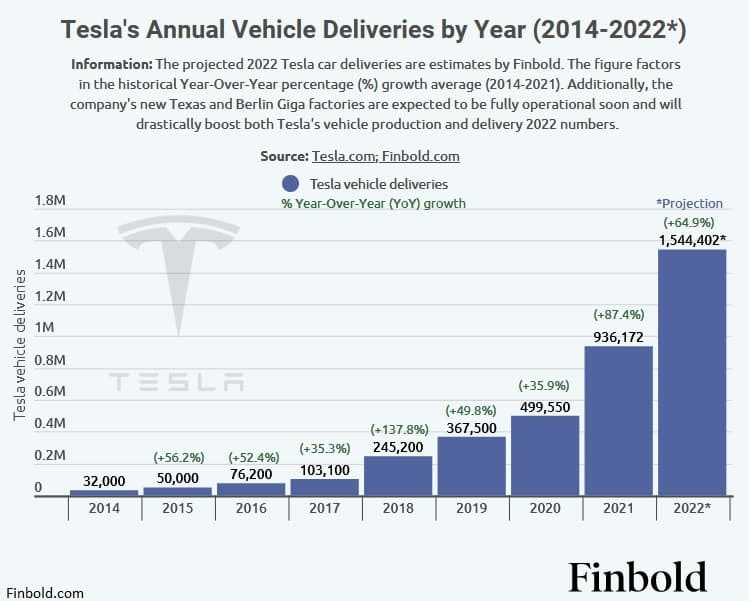 Tesla’s goal of pushing electric vehicles into the mainstream is gaining momentum with the company’s steady growth in deliveries. As the EV manufacturer expands production, the number of delivered vehicles is also expected to hit record levels in 2022.

Based on the company’s historical year-over-year percentage growth average between 2014 and 2021, Fibold estimates that in 2022 the vehicle shipments will for the first time surpass the one million to stand at 1,544,402, growing 64.9% from last year’s figure. Additionally, the target will be influenced by operations at the new Texas and Berlin plants.

The report highlights the significance of Tesla’s vehicle delivery numbers and their impact on the market. According to the research report:

“Overall, Tesla deliveries are one of the most closely watched metrics for the company. The metric usually underpins the company’s financial results and highlights the market’s demand for electric vehicles.”

In general, Tesla continues to increase its annual vehicle deliveries despite the EV industry facing challenges around the global supply chain and logistics related to the coronavirus pandemic.

However, the company is known to design its chips in-house to beat the semiconductor shortage, an advantage it has over other competing automakers. At the same time, Tesla has also reprogrammed software to use less scarce chips.