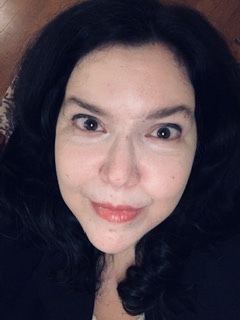 Hello EA, what is your favorite quote or excerpt in the book?

There’s a scene where my main character, Dara Bouldin, gets to go to a New Year’s Eve gala at the Russia Embassy. In real life, my career has taken me to some amazing places, including parties at the Russian Embassy in Washington (when our diplomatic relations were better, of course!). These were stunningly beautiful events with champanski, caviar, gorgeous people, string quartets — and the ballroom really did have a floor to ceiling double-headed eagle on the doors. As an engineer who worked on international cooperation projects, I was in the diplomatic world but not of it, and, like Dara, usually the youngest person at most of these events. In the novel, I tried to capture her awe along with the awkwardness she felt but was trying to hide. It was definitely fun to fictionalize some of my observations and relive those memories!

Can you tell us more about how a nuclear weapon could indeed change weather patterns?

The origin story of my novel is that in college I was taking Introduction to Nuclear Engineering, and a line on the very first page of my textbook completely shocked me. It said that nuclear weapons could be used for peaceful purposes, and that, “It should even be possible to alter unfavorable weather patterns in many parts of the world by removing mountain ranges which obstruct the flow of air.” This was in the older edition of a textbook by the late John Lamarsh that’s still in use today. I thought, someone should use this as a premise for a science fiction novel! No one did, so I decided, why not me? That said, the concept is being used satirically to point out problems…no one is suggesting we actually turn to nuclear weapons to solve the climate crisis!

Tell us more about the struggles of young people making their way today and how being young and naïve means they can be taken advantage of.

My main character in The Silent Count, like so many young people, has fallen into the student loan trap. Because her decisions are based on how to pay off massive debts, she gets into trouble trusting the wrong people. I have so much compassion for the generations coming up and wanted to portray their struggles in my novel. They have big dreams and want to save the world, but how can you do that saddled with enormous debts after tuition has outpaced inflation for decades? Making matters worse, hugely profitable companies benefit from talented young people paying for their own training via student loans. The price of tuition has to go down dramatically, and corporations need to share the financial burdens since they ultimately benefit.

Tell us how politics corrupts and skews human perspectives on what is right and wrong.

We’ve all seen members of Congress vote against good, necessary bills even their own constituents want, solely because they don’t want to help the other party succeed. Or politicians who suddenly flip- flop on an issue, right when a poll comes out showing their numbers are abysmal. There are definitely corrupt politicians in The Silent Count, up to and including the President, who never admit climate change is real and only acts when polls are down. But the president has scientists on his payroll willing to go along with him and publicly blast the one senate holdout who’s trying to bring some sense into the conversation. No one knows whom to believe and public confidence in the government continues to erode. It’s a vicious cycle, just like in real life.

Why and how do you think your book resonates with your audience, especially in our millennia?

This is my debut novel, and when I began writing it some years ago, I truly believed that by the time I completed and released it, society would have solved climate change. I figured The Silent Count could function as an alternate universe story! Little did I know we’d still be debating this problem in 2022, with the consequences growing daily. I actually had to make some of the environmental disasters in the story worse to reflect reality. Nowadays, most people realize that climate change is not a hoax and we need to find a solution; and my hope is that The Silent Count will entertain readers while making them think.

Is there another book coming?

The Silent Count is a standalone novel but a sequel is in the works! Dara Bouldin will be back to save the planet and keep readers on the edge of their seats. Be ready!