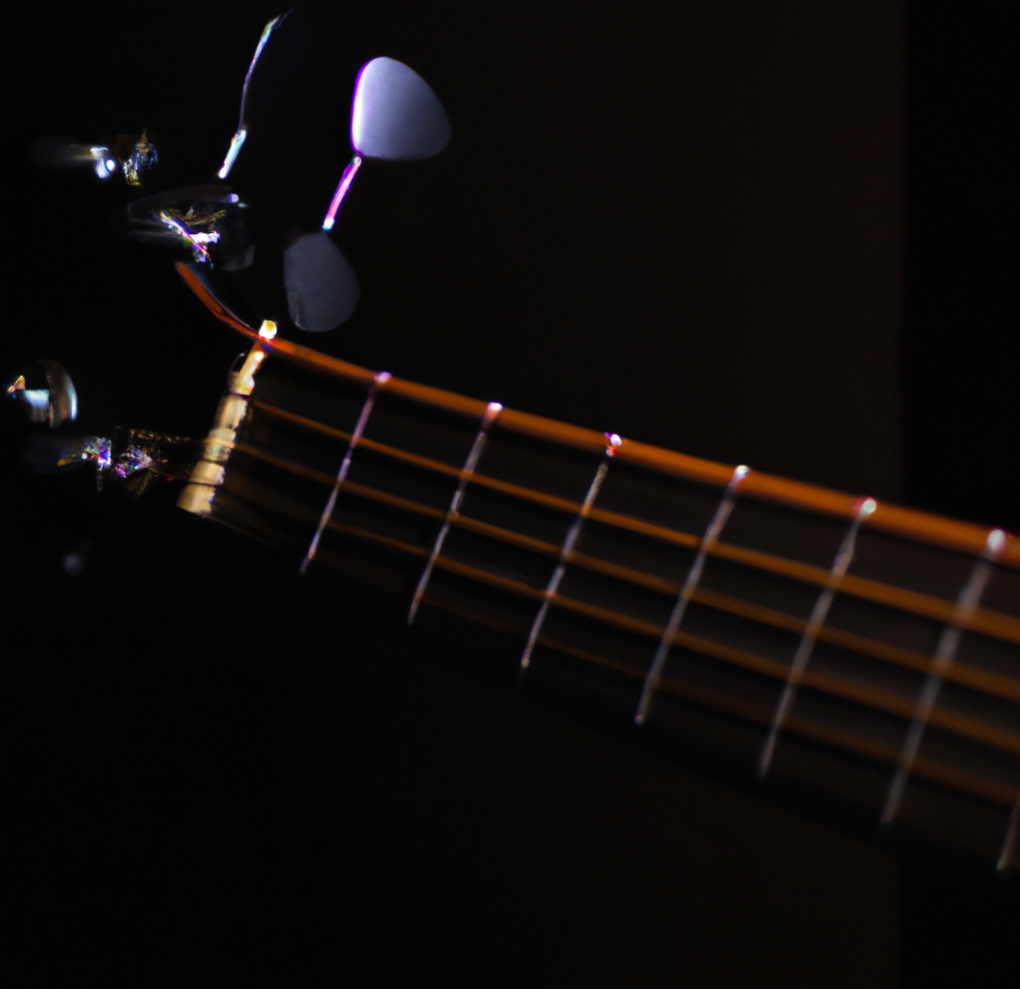 How to make money as an amateur guitar player

There are many different types of acoustic guitars available on the market today. They vary in size, shape, and features. Some common types include dreadnought, jumbo, concert, grand auditorium, and parlor guitars. Acoustic guitars can also be equipped with electronics that allow them to be plugged into an amplifier or PA system.

Acoustic guitars are relatively simple instruments compared to electric guitars or other string instruments like violins and cellos. However, there is still a lot of skill involved in playing them well. It takes practice and patience to learn how to make beautiful music with an acoustic guitar.

How to make money as an amateur guitar player?

There are a number of ways to make money as a guitar player. The most obvious way is to gig and teach, but there are other options available as well. You could session work, or become a guitar tech/luthier. You could also enter the world of online guitar tuition and start your own YouTube channel or website offering video lessons. Or, you could use your guitar skills to write songs for other artists and sell them royalties.

If you want to make money from playing the guitar, your best bet is to start gigging as soon as possible. Playing live shows is not only a great way to hone your craft, but it’s also an excellent way to earn some extra cash. Of course, you’ll need to build up a reputation and a following first, but once you do that gigs will start rolling in.

Another option is teaching guitar lessons. This can be done either in person or online, and is a great way to share your knowledge with others while also earning some money on the side. There are plenty of people out there who want to learn how to play the guitar but don’t know where to start – so if you’re able teach them then you could be onto a winner!

Session work is another avenue you could explore if you’re looking to make money from playing the guitar. Essentially, this involves being hired by other musicians (or bands) to record parts for their albums/songs. It’s usually good pay and can be quite exciting – although it can also be quite competitive too so it’s worth doing your research before diving in headfirst!

Finally, another option available if you have mad guitar skills is writing songs for other artists and selling them the rights/royalties. This can be harder than it sounds as getting cuts placed with big names can be tough – but it’s definitely doable if you have the right connections and put in the hard graft required!

How to find a job a guitar job?

One way to find guitar jobs is by searching online. There are many websites that list available music jobs, including those specifically for guitarists. Another way to find potential employers is by networking with other musicians and people in the music industry. Attend concerts and events, and introduce yourself to as many people as possible. You never know who might be able to help you find your dream guitar job.

Another option for finding employment as a guitarist is through private lessons. Many people who want to learn how to play the guitar are willing to pay for private instruction. This can be a great way to make some extra money while doing something you love – playing the guitar! To get started, promote your services by putting up flyers in local music stores or posting ads online.

If you have ambitions of becoming a professional musician, one of the best ways to achieve this goal is by joining a band. Bands are always on the lookout for talented new members, so this can be an excellent way to get your foot in the door of the music industry. Start by checking out local bands and see if any are currently holding auditions – or better yet, try contacting them directly and express your interest in joining their group.

No matter what path you choose when seeking employment as a guitarist, remember that persistence and dedication are key. It may take some time and effort before you land your dream gig, but if you keep at it eventually your hard work will pay off! Check out popular job boards that list weekend jobs such as Job Guide – they usually have weekend restaurant gigs not available elsewhere.

Who are the most famous guitar players in the world?

There is no doubting the fact that the guitar is one of the most popular instruments in the world, enjoyed by musicians of all genres and abilities. From those who play for fun at home to professional touring musicians, the guitar has a broad appeal that has resulted in many different styles of playing. In this article, we will take a look at some of the most famous guitar players in the world, exploring their individual styles and contributions to music.

Beginning with perhaps the most well-known guitarist of all time, Jimi Hendrix is considered by many to be the greatest player that ever lived. His unique style combined elements of blues, rock and jazz, creating a sound that was completely new and revolutionary. Hendrix was also known for his showmanship, often performing spectacular feats such as playing with his teeth or behind his back. Although he only released three studio albums during his lifetime (Are You Experienced?, Axis: Bold as Love and Electric Ladyland), each one is considered a classic and his live performances are still revered today. Sadly, Hendrix died aged just 27 from an accidental drugs overdose but his legacy continues to inspire guitarists all over the world.

Another hugely influential figure in electric guitar playing is Eric Clapton. A former member of The Yardbirds and Cream, Clapton’s career has spanned more than 50 years during which time he has won 18 Grammy Awards. He is particularly known for his work on cream’s album Disraeli Gears which features the iconic track “Crossroads” – one of the most popular songs ever written for electric guitar. Clapton’s style blends blues and rock influences together effortlessly, making him one of the most respected players both inside and outside of music circles.

In recent years he has toured with fellow legends Steve Winwood and Jeff Beck as part of what has been dubbed “The Power trio” giving fans old and new a chance to see some truly exceptional guitar playing firsthand.

If we turn our attention away from Britain for a moment, another name that regularly crops up when discussing great guitar players is Stevie Ray Vaughan. An American blues rock singer-songwriter and musician, Vaughan first found fame as part of Double Trouble before embarking on a hugely successful solo career which saw him achieve global recognition. Vaughan was known for his virtuoso technique as well as his soulful voice which made him stand out from other blues players at the time. He tragically died aged 35 in a helicopter crash but left behind a huge catalogue of work including five studio albums – each one featuring exemplary guitar playing throughout.

What are the most famous guitar songs?

There are a lot of great guitar songs out there, but some are more famous than others. Here are some of the most famous guitar songs of all time:

This is one of the most recognizable guitar riffs of all time. It was written by Ritchie Blackmore and is featured on the band’s 1972 album Machine Head.

2. “Stairway to Heaven” by Led Zeppelin

Jimmy Page wrote this classic rock song, which is featured on Led Zeppelin’s fourth album (untitled). It is one of the most popular rock songs ever, and has been covered by many other artists.

This hard rock song was released in 1988 as part of Guns N’ Roses’ debut album Appetite for Destruction. It was written by Slash and Axl Rose, and quickly became a fan favorite.

Clapton wrote this ballad for his then-wife Pattie Boyd while they were watching sunset together in Fiji. It appeared on his 1977 album Slowhand and has since been covered by many other artists.

What is the difference between an acoustic guitar and an electric guitar?

An acoustic guitar is a guitar that uses only an acoustic sound board to help project the strings’ sound. The strings vibrate and create sound waves in the air, which are then picked up by the sound board and amplified. An electric guitar, on the other hand, uses one or more pickups to convert string vibrations into electrical signals, which are then sent to an amplifier. This difference in how the two guitars produce their sounds is what gives each type of guitar its unique tone and feel.

There are many different types of acoustic and electric guitars available on the market today; choosing the right one depends on your individual playing style and needs. If you’re just starting out learning how to play guitar, an acoustic might be a good option for you since they are typically less expensive than electrics and don’t require an amp (meaning you can save some money). If you’re looking to join a band or play live music venues though, you’ll probably need an electric since that’s what most professional musicians use these days. Ultimately it comes down to personal preference – try out both types of guitars at your local music store before making a decision!

What is the difference between acoustic guitar vs classical guitar?

Another key difference is in the way the two instruments are played. Acoustic guitars are typically strummed with a pick, while classical guitars are plucked with the fingers. This can make classical guitar harder to learn for beginners, as it takes time to build up the strength and dexterity in your fingers. However, many people find the softer sound of classical guitar more pleasant to listen to.

Interview With The Author Jessica DelVirginia