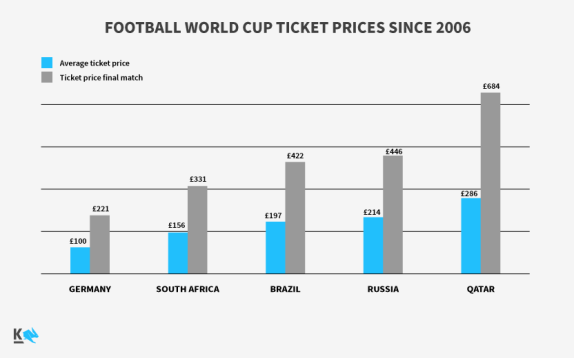 World Cup tickets in Qatar most expensive ever: On average £286 per match and £684 for attending the final

The sports supplier Keller Sports has analysed World Cup ticket prices in various sports. The conclusion for football: The World Cup in Qatar is not only the most expensive World Cup of all time in terms of total costs, but also in terms of ticket prices. A seat in the stadium is on average 39 % more expensive than during the last World Cup in Russia. Tickets for the grand final in Qatar cost 59% more than the final match in 2018.

The World Cup ticket prices for different stages in the tournament and price categories were researched and compared with the ticket prices of previous World Cups – Japan/ South Korea 2002, Germany 2006, South Africa 2010, Brazil 2014 and Russia 2018.

At the time when the first Winter World Cup will start in Qatar, football fans from all over the world will have spent £286 on average for a seat in the stadium. The cheapest matches are those in the group phase at the start of the tournament. In group B, England and Wales will face each other as well as Iran and the US. The first matches of England and Wales will take place on the 21st of November 2022. England plays against Iran. Wales faces the US. A spectator ticket for these matches cost fans around £93. Fans could purchase tickets either through FIFA’s sales platform or through the FA or the WAF. Permission to buy tickets was raffled among those who registered.

On top of ticket prices come costs for travel, accommodation and meals during a major high season. For hotel rooms and accommodation, Qatar has installed a price cap for the period around the tournament. Hoteliers are allowed to charge a maximum of £103 per night for a 4-star accommodation.

As usual, ticket prices increase with each match towards the final. The most expensive tickets are for the World Cup’s final. Those who want to be part of the 80,000 spectators at the final match on 18 December 2022 in the Lusail Iconic Stadium will pay around £684. This means tickets for the Doha final are more than 59% more expensive than the grand final tickets at the 2018 World Cup in Russia. Looking back, the cheapest host of a World Cup was Germany in 2006.

The last round of sales for the final will probably not start until the finalists have been determined. Then it’s first come, first served.

About Keller Sports: Since Keller Sports was founded in 2005, the KELLER Group has become one of the leading online outfitters for discerning sports enthusiasts – and has steadily expanded its range. In addition to the high-quality sports range on Keller Sports, sneakers and sportswear on Keller x and a complementary premium membership, the Munich-based company also offers a sports blog and the sports rewarding app “Keller sMiles”. The KELLER Group works closely with many well-known sports brands such as adidas, Nike, The North Face and ASICS, among others, as well as highly specialised manufacturers such as ON and Peak Performance.

All sources used and more information about World cup ticket prices can be found here: www.keller-sports.co.uk/static/presse/price-comparison-world-cup-tickets