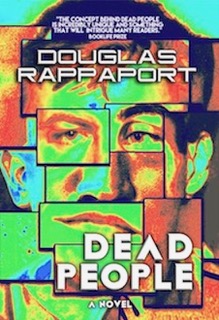 Douglas Rappaport is The Author Of The Week

DOUGLAS RAPPAPORT was originally a classically trained violinist and composer, having studied as a young man at various conservatories in the U.S. and abroad. During his college years, Douglas studied under famed protégé of Jascha Heifetz, Erick Friedman, and after graduate work at Yale University, went on to U.S.C. where he received an Advanced Studies degree in Film and Television Scoring. He also studied at Goldsmiths College (part of the University of London), Guildhall, and London International Film School, amongst others.

Douglas Rappaport’s most recent novel, Dead People, was published by Viking Dog Entertainment in November of 2021.

Can you tell us a little bit about your journey?

I started writing when I was a little kid, mostly writing short stories and eventually a novella. Most of my books are novels, with the exception of one non-fiction book, which was mostly about my love life and the death of my mother. When I was 9, I started playing violin and became very serious very quickly, spending most of my childhood practicing and performing violin professionally. As an adult, I worked in the video game industry for over 20 years.

Where can readers learn more about your books?