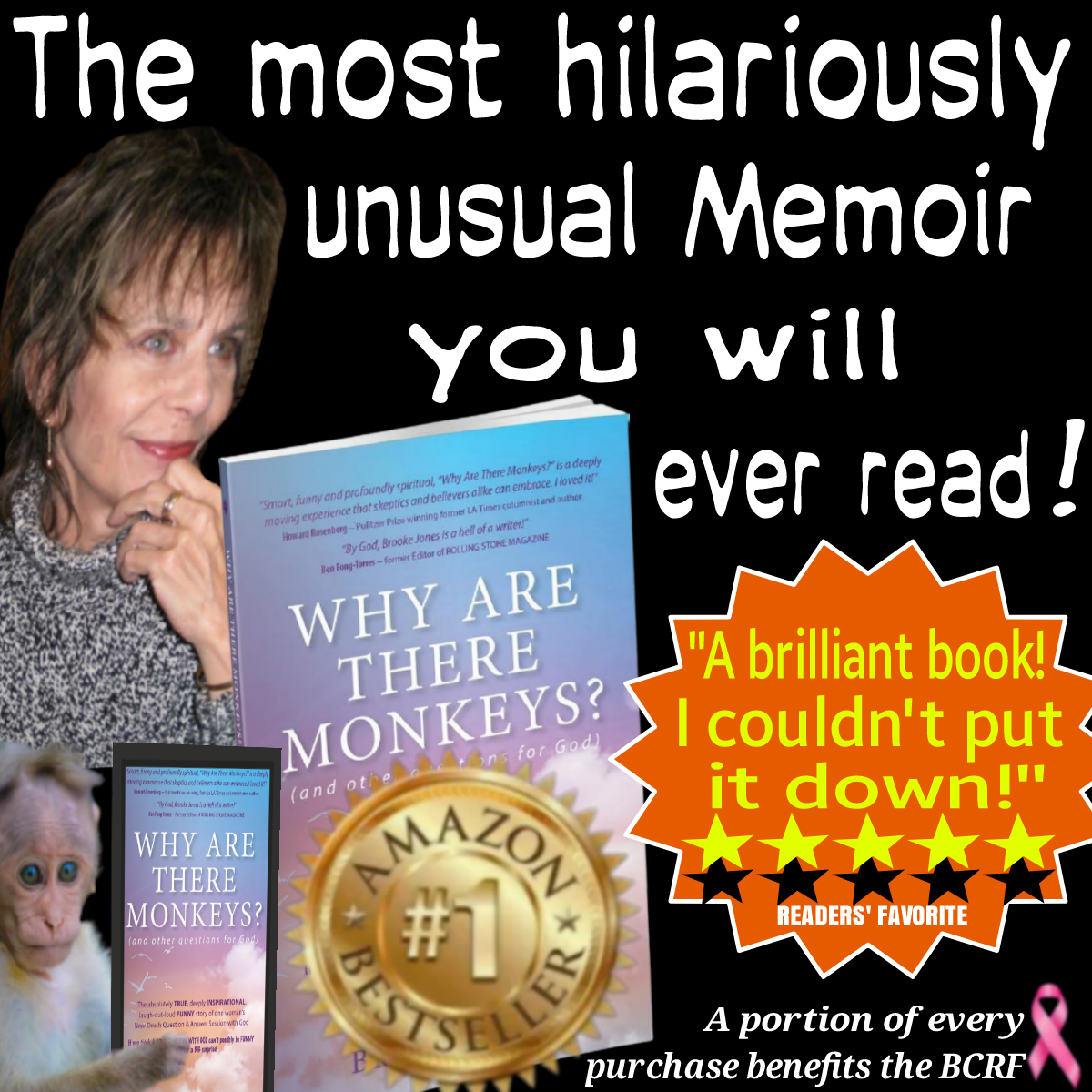 Brooke Jones is The Author of The Week

Before Brooke Jones was a Best Selling Author, she was a Hollywood screenwriter, Political Satirist and award-winning Radio Personality in Los Angeles and San Francisco. Being, as she is, a Breast Cancer Warrior, aka ‘survivor‘, Brooke donates a portion of all proceeds from the sale of her #1 Best Selling Memoir, “WHY ARE THERE MONKEYS?” to the Breast Cancer Research Foundation. For more information, please visit: https://www.writtenbybrookejones.com/

Age Is Just A Number (and other nonsense)

…So with the slow, graceful flow of age
I went forth…
…on the edge of seven…ty

George Bernard Shaw is credited with the adage “Youth is wasted on the young”. I wasn’t there when he said it (or wrote it), so I can’t vouch for the accuracy of the attribution, but, having now reached an age that provides ample time for backward glances, I can say that the truth of those words is unimpeachable…more’s the pity. And, while Shaw’s musing on ‘youth’ is valid as a stand-alone, it also makes for a lovely companion to the adage: “you don’t miss the water ‘til the well runs dry”.

As a rule, a young mind spends approximately zero minutes thinking about being old, but, of course, that doesn’t prevent us from eventually becoming old — if we’re lucky! And that becoming happens ever-so-very slowly. So slowly, in fact, that we almost don’t notice it…until…we do, and by that time, it’s pretty much a done deal. (in strictly technical terms, that basically sucks!)

One day, you look in the mirror, then spin in horror, searching for the creature whose decaying image is reflected in that mirror…or you gasp at the reflection in a storefront window of a terrifying “Dorian Gray”-dressed in your clothing…or…?  There are countless ways to meet one’s own advancing decrepitude for the very first time, some no more unpleasant than a poke in the eye with a sharp stick.

My first time was delivered to me by a handsome gentleman in his early 40s.

I saw it looking back at me from the depths of the adorable fellow’s blue eyes. There It was, clearly written in whatever the eye-color equivalent of neon might be – in letters    large enough for Stevie Wonder to see! And in that moment — a moment so brief that it was over the instant it had begun, and yet would last for the rest of my life – I suddenly and for the very first time, knew that my days as a hot Mama…a sexy broad…a solid Ten — were over. I wasn’t shocked — I knew it was coming but knowing that the train is coming doesn’t make you any less broken when it hits you.

My Mastectomy was performed… wait – performed? Really???…as in: “her Mastectomy was performed at the world-famous Michael Jackson Surgical Theater & Petting Zoo by the renown Brazilian Surgeon and Macaroni Sculptor, Dr. B. Flatu Lencey who, dressed in rhinestone-studded TuTu-Scrubs, and artfully assisted by Nurse Sveltlana Bendover, danced a flawless Swan Lake Pas de Deux while removing the patient’s ample breasts.”

Okay, now I’m just being silly.  My Mastectomy was per…I mean done – it was done – on December 23rd – the Eve of Christmas Eve (and, to the best of my knowledge,  no TuTus were involved).  When I left the hospital, I was bandaged from stem to stern…if my collarbone is my stem and my belly button is my stern (never having attended Medical School, I wouldn’t know these technicalities). My mummified torso remained mummified until January 30th — five weeks later, and during those five weeks, I didn’t so much as peek at what those bandages were hiding. I knew, but knowing and seeing are two entirely different things, and this girl wasn’t ready to see…until…five weeks later, ya see.

So, on the morning of January 30th, I stared at my mirrored reflection as I slowly unwrapped my post-Christmas “gift”.  This Mummified Mama pirouetted slowly, unwinding the layers of gauze. Once around…twice around…three times around until…all gone gauze, and all that remained was …me — a new me – a me who, in the place where her bodacious TaTas had been, now sported surgical scars from armpit-to-armpit — scars that bore an unsettling resemblance to an aerial view of the Santa Monica Freeway in the wake of the 1994 Northridge Earthquake. (If you’re a Southern Californian, you can visualize it.  If you’re not, you can’t – lucky you!)

Oddly enough, the very first thought that went through my head when first I laid eyes on my newly-mastectomized chest was “I wonder where men will look when they talk to me”. That thought made me chuckle but, when the moment actually played out – when the mastectomized me stood face-to-face with a member of the male persuasion for the first time — I laughed so hard I nearly choked…the man who did it.

As I removed my leather jacket, I watched his eyes lock on to where my chest used to be, and I kept watching as his eyes abruptly changed focus. He looked left. He looked right. He looked up. He looked down. He looked east. He looked west.  The poor boy was struggling to find purchase for his gaze. I watched beads of sweat forming on his forehead  as, in the Audio Booth of my brain, a cartoon voice was laughing uncontrollably.

Find out more at https://www.writtenbybrookejones.com/