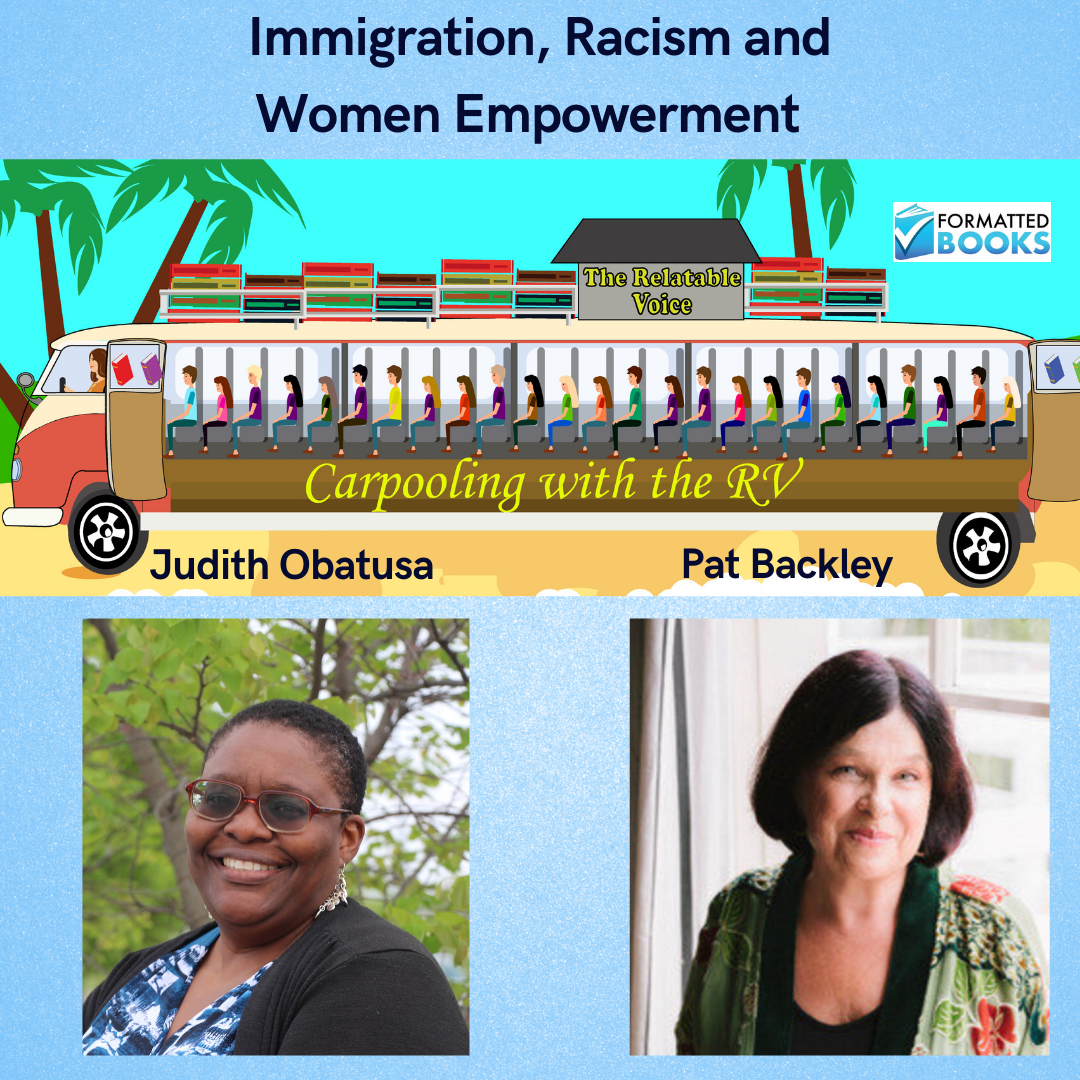 Lucia Matuonto interviewed Pat Barkley and Judith Obatusa on the “Carpooling with the RV”, which is the new series of the famous The Relatable Voice Podcast.

Pat Backley is an author and mother to one beautiful daughter.

She is English, but emigrated to New Zealand at the age of 59.

She has led an exciting and colourful life, which you can read about in her recently published memoirs: FROM THERE TO HERE (WITH AN AWFULLOT IN BETWEEN) and now, at the age of 70, she has the luxury to spend much of her time writing.

Her first book DAISY is a novel, a gentle family saga spanning from 1887 to 1974, based in Alabama, Harlem and London. As well as the best things in life like family, friendship and love, it also touches on some of the evils of society; poverty, racism and snobbery.

She has also recently co-authored a best-selling coffee table book:

THE WARRIOR WOMEN PROJECT, A SISTERHOOD OF IMMIGRANT WOMEN.

Written in conjunction with 21 other women, it tells the story of their lives and how immigration has changed them. Every woman has been vulnerable and has written from their heart and the idea behind the book is to inspire young women and girls to dream big, to understand that while life will undoubtedly be challenging, you must never give up.

She has another two books being published later this year: a sequel to DAISY and another historical saga entitled VALENTINE GEORGE.

Pat has always been fascinated by social history and the lives of ordinary people and believes their stories should be told.

“Once we die, our stories die with us and so I am determined to give my ancestors a voice, by telling their stories.”

Judith is an author and mother of 4 children

Judith Kambia Obatusa’s favourite things to do are reading and writing. She describes reading as “an opportunity to travel to new places, listen to new perspectives and experience new cultures in the comfort of your bedroom, park bench or anywhere you’ve got a book in your hand.” She remembers the very first book she read, Felicia by Rosina Umelo. It was a story about a young girl who experienced many traumas, including war, but eventually succeeded. “I mourned her losses and celebrated her successes with her. That marvelous initiation into the world of novels sealed my fate as a reader”, Judith recalls.

Regarding writing, she explained that from a very young age, she discovered that writing enabled her to dream. “I could imagine the future and even live in it through the words I wrote”, she said. Another thing she loved about writing is that you can literally “scratch that” and rewrite it if you’re not satisfied. This is something you cannot do with the spoken word.

She first started writing publicly through her blog JudithMusing where she shared her thoughts about different things, reflecting on happenings in the world around us and life in general. She also began a movement called Broken and Braced, a Facebook page where she shares encouragement to others and a blog with the same name where she shares the stories of other women who had come through abuse.

However, she found that she was prone to oversharing in a world where everyone else carefully curated their words. According to her, she struggled to fit her writing into the preferred perfect mold and because her life was quite far from perfect, she took a break from her blogging and social media mid-2018 to rescue her mental health.

While on that break, on one of her volunteering jaunts in Windsor-Essex where she lived at the time, she met a woman who eventually became one of her best friends in Canada, Lisa Raffoul, a transition coach. Lisa introduced her to Brene Brown’s talks and writing. Judith described this as a major step in setting her free from the prison of societal compliance. She said she realized that trying to fit into the “mold” was going to break her spirit and make her life one of mere existence. She then acknowledged the fact that she had to be herself to be happy and satisfied. She told herself that she was good enough and could be herself in every situation.

Judith was previously a peer advocate for the Ontario Council of Agencies Serving Immigrants’ (OCASI) initiative to end gender-based violence in the immigrant and refugee communities until she moved to the province of British Columbia. She has experienced and knows the role of shame in perpetuating the trauma and generational impact of abuse which is why Brene Brown’s vulnerability message resonated so loudly with her. Judith believes that we remain stuck in abuse because we are ashamed. She says that the only way to come out of abuse, heal from it and break the cycle, is to be vulnerable.

Being vulnerable may come with violent pushback from friends, family, keyboard warriors on social media and even some helping organizations but staying the course of vulnerability is where true freedom lies.

Judith decided to come out to the world as a vulnerable empath and went back to social media in 2020. Since then, she’s co-authored a book with 20 other immigrant women spread across three continents. She calls this her foot in the door of authoring and her low hanging fruit. You can listen to her interview on Relatable about the book.

Judith currently moonlights as a clarity coach for entrepreneurs and potential entrepreneurs, helping them with idea generation, business strategy, marketing and business development. You can find her on Instagram @judithobatusa and on Facebook @judithobatusa, where she recently began sharing her thoughts on giving our children Tough Love.