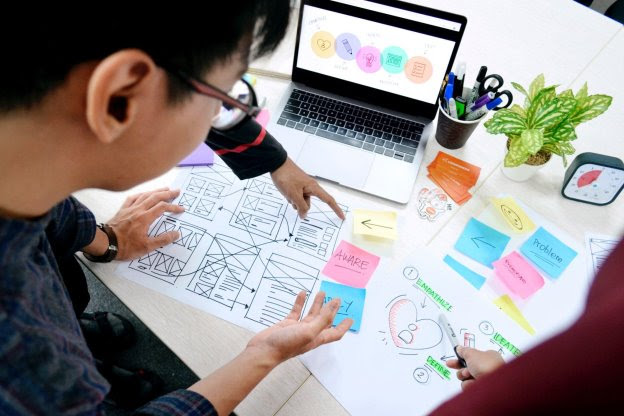 The Bumpy Ride of Emerging Markets Towards Digitization: How Applying Strategic User-Oriented Approach Could Boost Usage of Public Services

Emerging markets have been following the digitization race. However, a lack of a user-oriented approach when designing e-services has been slowing down their progress, resulting in poor user engagement and unfulfilled expectations of citizens. According to Mindaugas Glodas, CEO at NRD Companies, a global IT and consulting group of companies specializing in e-governance, Design Thinking (DT) methodology could help address the problem at its core. Employed by world’s leading governments, DT principles can aid in developing user-oriented e-solutions and, as a result, drive expedient digitization of the public sector.

When it comes to modernizing services, the initial ideas tend to revolve around the need to digitize and automate services, not the people who will be using these services. For this reason, a great deal of government efforts to present modern e-solutions fall short of public expectations. This approach has been hurdling the development of e-governance initiatives, especially in emerging markets.

For example, in Lebanon, a country in the Middle East, inadequate service delivery has severely weakened the public’s trust in the government. In an attempt to remediate the situation and deliver greater value to citizens, it started to implement strategic reforms to transform its e-services. However, excessive focus on the IT framework, rather than its citizens’ aspirations and needs, resulted in progress slowdown, without solving the problems at hand.

Similarly, in the case of Pakistan and its efforts to create a digital government, the country has faced a number of impediments that followed the e-service adoption progress. The scarcity of people using the solutions, and the lack of awareness about their significance and benefits are one of the key reasons why the country’s efforts collapsed.

“There is no point in creating new technology just for the sake of it — citizens should find the solutions necessary and use them on a daily basis. Creating such solutions is done by involving citizens: conducting surveys and inviting them into the planning processes. Only then, based on their behavior, should a government aim to create services that reflect their needs, not vice versa. This is why countries sharing a similar approach as Pakistan or Lebanon struggle when trying to implement e-government initiatives,” Glodas explained.

In large part, the creation of public services as modeled by demands of institutions, not the needs of the citizens, is caused by a lack of suitable tools. Mr. Glodas shared that even in Lithuania, a developed and highly digitalized country with a high digital literacy level, a survey of heads of governmental institutions showed that only 27% of respondents believed their institutions have tools suitable for the creation of modern digital services.

“Of course, there are other obstacles some countries face, for instance, red-tapism, limited or inadequate allocation of resources, political corruption, etc. However, a more user-oriented approach, like Design Thinking and its principles, is invaluable in terms of leading deliberate change in governments that have the necessary tools and are willing to transform their e-services,” he added.

Design Thinking for a user-centric approach and successful e-Government

According to Mr. Glodas, putting people, rather than technology, at the top of the priority list maximizes the likelihood of successful e-service adoption. This is where Design Thinking comes into play, as it fosters a user-oriented focus.

Design Thinking is a methodology, whose principles are based on deep-level user analysis, aiming to discover the needs of the user and build from there. Glodas notes that although widely utilized by the business sector, Design Thinking is also successfully applicable in the government sector. For example, studies show that in the UK, which has applied DT for building e-government e-service systems for the past twenty years, the confidence of citizens towards e-solutions has increased to 78%.

Mr. Glodas noted that Design Thinking methods have shown to be effective in building e-Government systems in emerging markets. For example, NRD Companies has facilitated the creation of new public digital services in Barbados by implementing the GxP platform. This platform provides tools to create and launch e-services based on principles of DT in a matter of 5-8 workdays without the external help of IT contractors when other data is readily available from other platforms. For citizens and businesses of Barbados, services built on the GxP platform have shortened the time required to receive a driver’s license, alcohol trade license, and other documents from 56 to 5 days on average.

Another example of the application of the Design Thinking method is the Personal income tax return wizard, implemented by NRD Companies in Lithuania. This e-service is a replacement for an older tax return system, which required filling in complicated forms. Older e-service regularly caused huge workloads for State Tax Inspectorate (STI) specialists during months leading to the deadline of tax return declaration due to the need for consultations.

The new wizard tremendously simplified the process of tax returns: 60% of users were provided with a possibility to file their declarations with one-click. For most the procedure took no more than 3 minutes and 87% of taxpayers did not need any help from specialists of STI. In 2019, the first year when the tax declaration wizard was launched, 1.55 million taxpayers filed their declarations — an increase of almost 11%, compared to 2018. Citizens who have used the new tool also report a much higher satisfaction rate and STI reports a lower level of errors in declarations.

“It is important to note that the needs of citizens vary country by country. That’s why Design Thinking method comes in handy: it helps to identify the right solutions on a case-by-case basis for governments to implement. This way, administrations can build efficient systems from the get-go, instead of figuring out the right strategy through trial and error, sacrificing the time and funds that could be used on other projects,” Mr. Glodas explained.