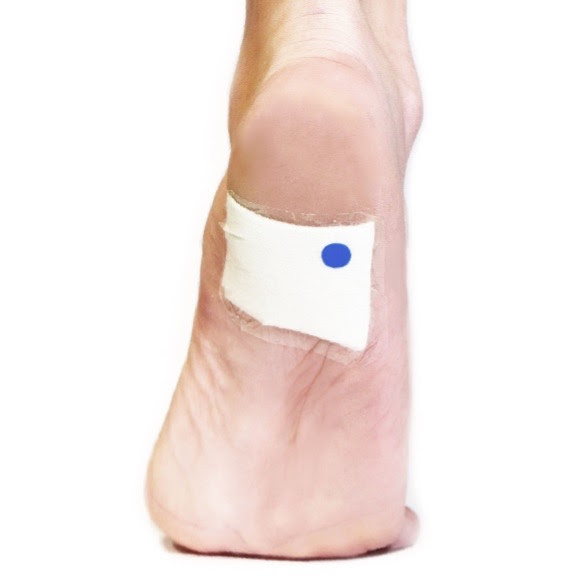 Scientists at Queen’s University Belfast have invented a tiny indicator that changes colour if a patient’s wound shows early signs of infection.

The non-invasive indicator, which is around the same size as one of our fingertips, is the first of its kind. It does not make any contact with the wound but detects the beginnings of infection by sniffing the air above it.

It can be added to already existing bandages and allows infections to be detected without taking off the dressing – something which can inhibit the healing process and increase the likelihood of wound infection.

It is estimated that around 1 to 2 per cent of people in developed countries will experience a chronic wound in their lifetime and in the UK £3.2 billion is spent each year treating the problem.

The research findings have been published in the Royal Society of Chemistry’s ChemComm  journal.

Professor Mills says the research could have a major impact on healthcare globally: “The colour-changing indicator we have developed is just a tiny dot but it could have hugely positive benefits for our patients and health care systems worldwide.

“Usually if a patient has a wound, especially a chronic wound, a nurse or doctor will check for infection every two to three days by removing the dressing. Changing a dressing can be unnecessary, painful and an infection risk. All of this could be avoided with our indicator, saving time, money and pain.”

Explaining how the indicator works, Professor Mills says: “If infection is starting in a wound, there is often a sudden growth of aerobic microbiological species and as they grow they generate carbon dioxide.

“Our indicator detects this rise in carbon dioxide causing the dot to change colour, flagging the infection in its very early stages before it actually takes hold and overwhelms the patient’s immune system. This means it can be treated quickly, avoiding unnecessary pain for the patient and significantly reducing the possible need for hospitalisation.”

Professor Brendan Gilmore from the School of Pharmacy at Queen’s says: “This sensor can provide an early warning of infection before it has progressed to a chronic, persistent colonisation of the wound by microorganisms which are by then much more difficult to treat effectively with antibiotics.

“The sensors respond quickly to the presence of infection, and allow healthcare providers to make informed decisions about managing the wound, including whether or not to use antibiotics. Inappropriate antibiotic use is known to drive the emergence of antibiotic resistance. Crucially, these sensors can tell us whether or not the intervention has worked in killing the microorganisms which caused these infections.”

The project is entering the next phase where an app will be developed so that the patient will be alerted if there is an infection. The same information would also be sent to the patient’s nurse or doctor and be used to inform treatment plans.

Professor Mills says: “We are very pleased to now have our research findings published and to be able to offer a simple, inexpensive, non-invasive way to monitor the progress of healing wounds. We are currently in discussions with industry in how to take this forward and we hope to run clinical trials soon.”

Michael Pickard is The Author Of The Week

Re-Awaken You with Jenny Mannion