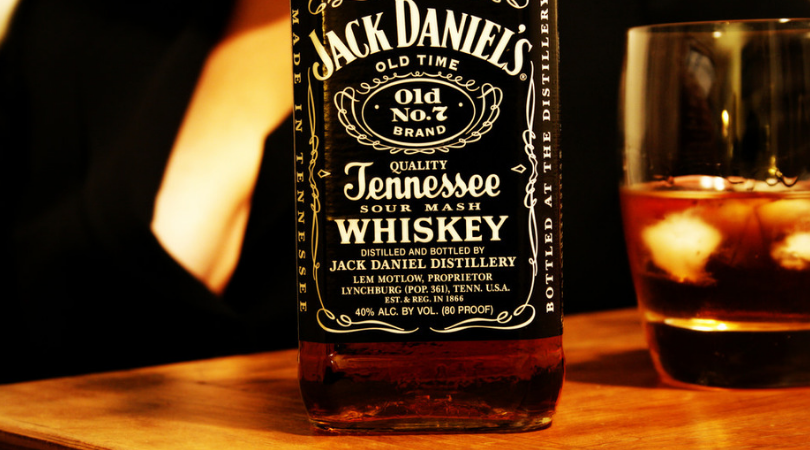 Jack Daniel’s is a brand of Tennessee whiskey and the top-selling American whiskey in the world. It is produced in Lynchburg, Tennessee, by the Jack Daniel Distillery, which has been owned by the Brown-Forman Corporation since 1956. Jack Daniel’s home county of Moore is a dry county, so the product is not available for purchase at stores or restaurants within the county.

The product meets the regulatory criteria for classification as a straight bourbon, though the company disavows this classification. It markets the liquor simply as Tennessee whiskey rather than as Tennessee bourbon. As defined in the North American Free Trade Agreement, Tennessee Whiskey is classified as a straight bourbon authorized to be produced in the state of Tennessee. Tennessee law (57-2-106) further requires most producers of Tennessee whiskey to filter the spirit through charcoal made from maple prior to aging, in addition to meeting the above requirements (the “Lincoln County Process”).

The Jack Daniel’s brand’s official website suggests that its founder, Jasper Newton “Jack” Daniel, was born in 1850 (and his tombstone bears that date[1]), but says his exact birth date is unknown. The company website says it is customary to celebrate his birthday in September. The Tennessee state library website said in 2013 that records list his birth date as September 5, 1846, and that the 1850 birth date seems impossible since his mother died in 1847. In the 2004 biography Blood & Whiskey: The Life and Times of Jack Daniel, author Peter Krass said his investigation showed that Daniel was born in January 1849 (based on Jack’s sister’s diary, census records, and the date of death of Jack’s mother).

Jack was the youngest of 10 children born to his mother, Lucinda (Cook) Daniel, and father Calaway Daniel. After Lucinda’s death, his father remarried and had three more children. Calaway Daniel’s father, Joseph “Job” Daniel, emigrated from Wales to the United States with his Scottish wife, the former Elizabeth Calaway. Jack Daniels’ ancestry included English, and Scots-Irish as well.