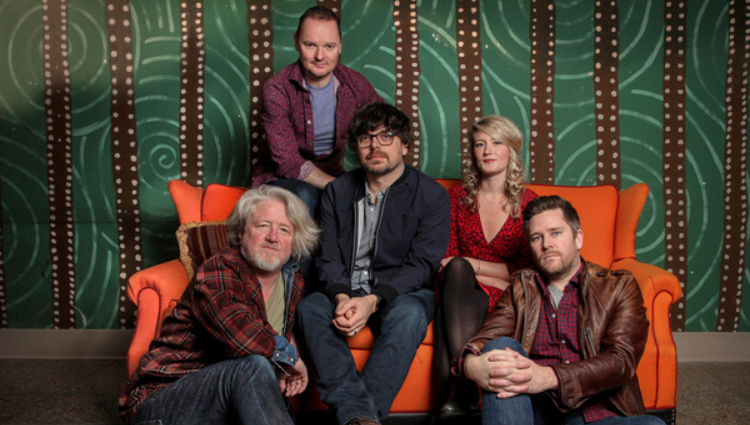 Nashville, TN: A centuries-old Irish folk song, “The Irish Rover,” is being re-released digitally today, March 12, 2021, with a new spin by multinational award-winning Celtic group, Gaelic Storm. “The Irish Rover” is also featured on the group’s nine-song collection of newly recorded traditional Irish songs entitled, “One For The Road” available for pre-order here. The CD’s release coincides with Gaelic Storm’s livestream concert, “One For The Road,” scheduled for March 17 at 8:00pm ET. Sponsored by Cider boys, concert tickets are $20 and available here. Purchase/stream the new single here. Limited edition merch bundles will be also available in advance and during the livestream here.Produced by founding band member Steve Twigger, a very limited supply of CDs will include individual notes personalized and autographed by each band member. All songs on “One For The Road” will be released to streaming services later in 2021. During the livestream concert (the band’s third livestream since the Pandemic began) fans will have the opportunity to donate to the Gaelic Storm Crew and Save Our Stages.

“We have selected some of our favorite traditional songs that we grew up listening to and played in the early days when the band first started,” commented Gaelic Storm’s Patrick Murphy. “We have finally decided to record eight of these songs and a new instrumental track called ‘The Frozen Pipes’.”

About Gaelic Storm
Since forming in 1997, acclaimed Celtic group Gaelic Storm have risen from local pub sessions in their hometown of Santa Monica, California to an internationally known touring and recording act. Led by founding members Patrick Murphy and Steve Twigger, the band’s first major exposure arrived before they had even recorded their first album. Appearing as the “steerage band” entertaining passengers in James Cameron’s massive 1997 blockbuster, Titanic, Gaelic Storm were widely embraced by the time they released their self-titled debut a year later. This laid the groundwork for a career that would eventually find them topping the Billboard World Chart seven times, making appearances at mainstream music festivals, and regularly headlining the largest Irish festivals across the country, all the while gaining a reputation as a genre-bending Irish rock band, whose songs mix Celtic traditions with something uniquely creative. The group’s lineup varied over the course of its first decade, but eventually settled on piper Peter Purvis, percussionist Ryan Lacey, and fiddler Katie Grennen complementing Murphy and Twigger’s multi-instrumentalism and shared vocal duties.  With their energetic mix of Irish and Scottish traditional fare, drinking songs, and playful original material, they proved to be a popular touring act with a dedicated, loyal fan base of nearly one million social media followers and 250 million streams across all streaming platforms.