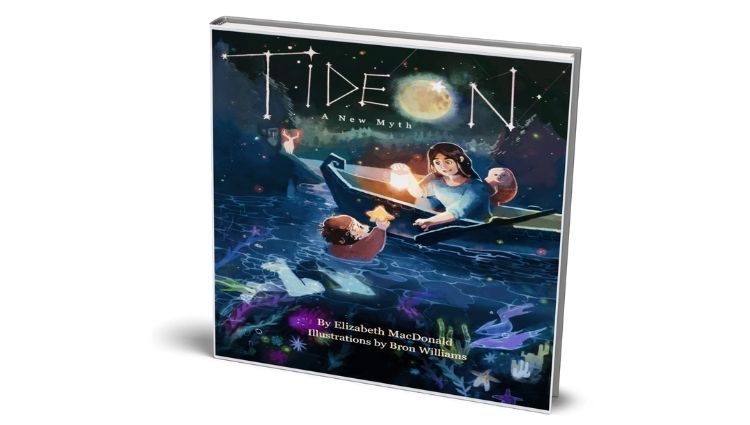 Tideon: A New Myth.’ It is an incredibly unique children’s book that’s destined to raise awareness around bullying .

For those interested in exploring the subject or theme of your book, where should they start?
Hi! Ok so I work with the Beautiful Lives Project, it’s a nonprofit that helps physically and mentally challenged children get self-esteem, it helps them feel good about themselves by letting them play on the fields or courts with professional sports teams, like baseball or basketball. It was founded by Bryce Weiler, he’s a blind sports caster who found that he has a phenomenal talent, an eidetic mind that can quote sports stats like an encyclopedia. So I wanted to help children who feel differently from others that they are totally fine and should be happy and comfortable and feel safe and secure with themselves because they have gifts that will make them shine. We’re working now on a regular t.v. show on Facebook that will spotlight children with Downs Syndrome and their successes, also their families and communities. It’s that spirit that’s behind Tideon.

How did you become involved with the subject or theme of your book?
Ok I guess I always felt different and awkward as a kid, I didn’t talk until I was five years old. I guess I was overwhelmed, growing up in a very large family. But I loved to read and write, I’ve always wanted to be a reporter, since age 10. When I was in 6th grade a class assignment was to write your own myth, like a Roman or Greek myth. That’s when I wrote Tideon, it always stayed with me, the story of a little boy who doesn’t fit in, and how his father and his neighbors think he’s a misfit. I felt like I just needed to get this story out there.

Anything you would like to say to your readers and fans?
I’m really just so thankful if they read the book. My illustrator Bron Williams did a phenomenal job capturing the magic of ocean life and the world around us, her artwork really pulls you in. Bron also told me she likes how the writing doesn’t talk down to children, I really wanted to get children to ask questions and to learn even more.

What did you enjoy most about writing this book?
Well, I really like exploring the idea that there’s a much bigger world and universe out there beyond our five senses. I’ve always been taken with the fact that the animal kingdom is experiencing the world around us much differently than human beings are. Bird and arctic reindeer for example can see much more colors than human beings can. Human beings are trichromats we can see about 1 million different shades and levels of colors, but birds and arctic reindeers are tetrachromats they may be able to see an incredible 100 million colors. Plus animals including dogs and others can hear a much wider range of sounds than we can. So there’s a gentle peace in that knowledge, there’s a peace in the humility of that knowledge, and a kindness, that I think children can connect to.

Can you tell us a little bit about your next books or what you have planned for the future?
I’m thinking of writing a sequel to Tideon, I have the ideas in my head now for it.

How long have you been writing?
I’ve been writing since I was ten years old. I wrote a book called Skirting Heresy: The Life & Times of Margery Kempe, and a play off my book that debuted in England two years ago. It’s an historical fiction book based on the true story of Margery Kempe, considered the first autobiographer in the English language. She was put on trial and almost put to death multiple times for her beliefs and because she preached about the Gospels on the streets of England when that was against the law. The monarchy of Henry V repeatedly tried to capture her. This is Catholic England before Joan of Arc was executed, my favorite period in history.

Can you tell us a little bit about the characters in Tideon?
Well, Tideon is a little boy who is in love with the ocean, his mother Marina desperately loves him, he’s a misfit. Marina is upset because her husband mistreats his son because he’s different and so do the neighbors. But Tideon has a powerful gift, a miracle that was given to him that makes him ocean royalty. Also I like how Tideon is always forgiving because he just wants to run away and play in the ocean, which his mother Marina soon sees and recognizes. With the help of the Goddess of the Moon and her royal captain Ayalon, they see who Tideon really is, too, they know his true destiny.

If you could spend the day with one of the characters from Tideon who would it be? Please tell us why you chose this particular character, where you would go and what you would do?
I love Tideon, and his mom, we would be in the ocean all day, and I love the Moon and her captain the royal stag Ayalon, we’d probably wander through the forests at night. Yes I would love to do that, sleep outside under the Moon at night. So long as it’s safe!

Elizabeth MacDonald has been a business journalist for more than three decades. She has covered business and political news as the anchor of the Evening Edit at Fox Business, at the Wall Street Journal, Worth Magazine, Money Magazine, and as a senior editor for Forbes Magazine, where she created the World’s Most Powerful Women annual ranking. MacDonald has won more than a dozen awards and has testified twice to Congress about IRS and tax reform. Members of Congress have noted MacDonald’s IRS coverage led to improved taxpayer rights at the agency. MacDonald is also the author of the historical fiction book and play “Skirting Heresy: The Life and Times of Margery Kempe,” which debuted in England in September 2018. This is her first children’s book.Bron Williams is an illustrator, performer, and makeup artist based in Seattle, WA. Since graduating from The New School in 2016, Bron has focused on private commissioned work and is currently creating a multimedia web comic, Username. Her work centers on designing and illustrating promotional pieces for various non profits and private commissions. She spent her early professional years in documentary production in Manhattan, and was an archival researcher on The Years Project produced by Showtime. She was a member of the 2016 ACT Think Tank in Seattle, where she assisted in conceptualizing revolutionary intersections between the tech industry and the performing arts. This is her first foray into the world of children’s literature illustration.